As the legislative session reaches the midpoint (assuming an on-time adjournment on April 30), little action has been taken on retirement legislation.  One bill progressing in the Senate (SB 84) would make a significant change to the Florida Retirement System.  If it passes, FRS members hired on or after July 1, 2022 would be placed in the Investment Plan (defined contribution plan), with no option to move to the Pension Plan (defined benefit plan).  The bill still lacks a companion in the House, however.  The FRS rate bill (SPB 7018), which is a “must pass” measure as part of the state budget, is on its final committee stop.

Copies of any bill can be viewed at the legislature’s website: www.leg.state.fl.us.  Please feel free to contact us if you have any questions.

Under Section 121.74, FRS assesses employers 0.06% of the payroll reported for each class or subclass of membership to offset the costs of administering the investment plan and providing educational services to FRS members.  SB 84 would increase the assessment to 0.07% of payroll, effective July 1, 2022.

On March 31 an amendment exempting Special Risk Class members from compulsory participation in the Investment Plan was adopted and CS/SB 84 was approved by the Senate Appropriations Committee – the bill’s final committee assignment.  The bill still has no companion in the House.

SB 230 would extend membership in the FRS Special Risk Class to members employed in water, sewer, or other public works departments, who perform duties under conditions where there is a clear and present safety or health hazard that poses an imminent risk to the life and safety of the member, such as working in confined spaces or working around toxic chemicals or wastewater.

SB 230 currently has no House companion, and has been referred to the Senate Committees on Governmental Oversight and Accountability, Community Affairs and Appropriations.

HB 477 would extend membership in the FRS Special Risk Class to members employed by the Florida State Hospital; Northeast Florida State Hospital; a developmental disability center, including Sunland Center at Marianna, Developmental Disabilities Defendant Program at Chattahoochee, and Tacachale at Gainesville; or the North Florida Evaluation and Treatment Center, who spend at least 75 percent of their time performing duties that involve contact with patients or inmates.  The bill would be effective July 1, 2021.

HB 477 has been referred to the House Government Operations Subcommittee, the Appropriations Committee and the State Affairs Committee.  It is identical to SB 1518, which has not yet been assigned to any committees.

Section 112.1815, Florida Statutes, provides guidelines and restrictions governing benefits for firefighters, EMTs, and law enforcement officers who are injured in the line of duty from causes such as exposure to toxic substances, occupational disease, and mental or nervous injuries. Section 112.1815 currently defines the term “first responder” for purposes of that section, as

The bills would also extend membership in the FRS Special Risk Class to FRS members employed as 911 public safety telecommunicators. The monthly benefits for 911 telecommunicator members would still be calculated using the Regular Class multiplier (1.6%).

Under current law, if an FRS retiree is employed by any FRS employer within 6 calendar months following retirement or deferred retirement option plan participation (DROP), termination of employment is deemed not to have occurred and the member’s retirement is voided.  In this situation, the employee and employer are jointly and severally liable for repayment to FRS of all benefits received by the employee.

HB 321 would create an exception, effective January 1, 2022, under which an FRS retiree from a regular class teaching position may be reemployed as a substitute teacher with an FRS employer immediately after retirement or DROP participation. The retired member may not renew membership in FRS.

HB 321 has no Senate companion. It has been referred to the Government Operations Subcommittee; Secondary Education & Career Development Subcommittee; Appropriations Committee and State Affairs Committee.

Section 222.21(2)(a), Florida Statutes, exempts any assets payable to a participant or beneficiary in a fund or account from all claims of creditors of the participant or beneficiary if the fund or account is exempt from taxation under sections 401(a), 403(a), 403(b), 408, 408A, 409, 414, 457(b), or 501(a) of the Internal Revenue Code.  Under section 222.21(c) any such assets that are exempt from claims of creditors do not cease to be exempt by reason of a direct transfer or eligible rollover after the owner’s death.  SB 702 and HB 253 amend section 222.21(c) to provide that an interest in any fund or account described in section 222.21(2)(a) that is received in a transfer incident to divorce also continues to be exempt from legal process after the transfer. This provision is effective retroactive to transfers incident to divorce without regard to the date the transfer was made.

SB 702 has been approved by all of its assigned committees and was placed on the Senate calendar on second reading.  HB 253 is on the agenda of the House Civil Justice and Property Rights Subcommittee; and has also been referred to the Insurance and Banking Subcommittee; and the Judiciary Committee.

In response to the effects of COVID-19 on first responders, several bills have been filed to address work-related exposure to communicable and infectious diseases. Under Section 112.181(2) Florida Statutes, any condition or impairment of health caused by hepatitis, meningococcal meningitis, or tuberculosis, resulting in the total or partial disability or death of an emergency rescue or public safety worker, is presumed to have been suffered in the line of duty, unless the contrary can be shown by competent evidence.

These bills would add to section 112.181 a rebuttable presumption that disability or death caused by an “infectious disease” was suffered in the line of duty.  “Infectious disease” would be defined as “any condition or impairment of health caused by a disease that has been declared a public health emergency in accordance with s. 381.00315.” The emergency rescue or public safety worker would be required to verify by written affidavit that, to the best of his or her knowledge and belief, he or she contracted the infectious disease during a public health emergency and was not exposed, outside of the scope of his or her employment, to any person known to have the infectious disease.  The bill would take effect July 1, 2021.

Most of this 49-page bill is dedicated to the creation of a new Chapter 952, Florida Statutes: Law Enforcement and Correctional Officer Oversight.  Generally, the Chapter requires each county to establish an independent Office of Law Enforcement & Correctional Officer Oversight, with the independent authority to investigate and discipline police officers and correctional officers. It also prohibits the inclusion of disciplinary matters in collective bargaining agreements for law enforcement and correctional officers.

When combined with the existing language under section 112.3173(3), the effect of HB 1609 would be to require forfeiture of the pension benefits of:

HB 1609 has no Senate companion and has been referred to no committees.

Neither bill has been referred to a committee.

These bills would require any municipality, metropolitan planning organization, or special district created on or after July 1, 2021, to participate in the Florida Retirement System.  Participation is currently optional for these entities.

The bills would also provide an exception to the FRS reemployment restrictions for elected officials.  The exception would permit an FRS member who retires or terminates DROP on or after July 1, 2021 to hold an elective public office in an agency covered by FRS.  The elected officer would be permitted to receive retirement benefits in addition to the compensation of the elective office without regard to the time limitations otherwise imposed by FRS.

Neither Bill has been referred to a committee.

It also amends procedures for married FRS members who do not designate their spouse as primary beneficiary.  Under current law, the member’s spouse must sign the beneficiary designation form to acknowledge the designation.  SPB 7016 would eliminate this requirement, and instead require that the spouse “be notified and acknowledge any such designation.”  If the spouse cannot be located or fails to affirmatively acknowledge the designation, the member would be able to request that the acknowledgment requirement be waived by SBA through an affidavit describing the facts and circumstances.

SPB 7016 was approved by the Committee on Governmental Oversight and Accountability and is now in Appropriations. 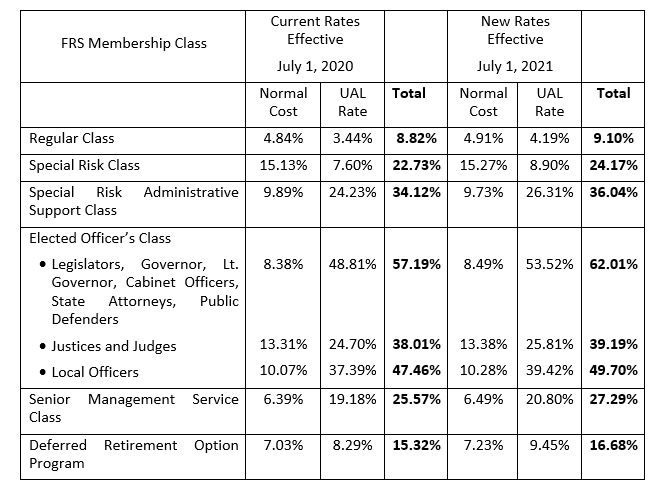 SPB 7018 was approved by the Senate Governmental Oversight and Accountability Committee and is on the April 1 Appropriations Committee agenda.

If you have any questions on a bill, please contact Glenn E. Thomas, Janice Rustin or Jim Linn.